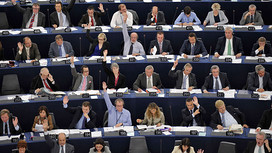 The European Parliament has voted down a controversial proposal put forward by German Green MEP Sven Giegold to introduce a bonus cap for managers of UCITS investment funds. Mr Giegold wanted to curb bonuses so that they could no longer exceed managers' basic salaries.

However, UK Conservative MEP Syed Kamall brokered an amendment with the European People's Party (EPP) and the Liberals (ALDE) to scrap the bonus cap. The amendment was passed this morning. It establishes that bonuses


"shall be considerably contracted where subdued or negative financial performance of the management company or of the UCITS concerned occurs, taking into account both current compensation and reductions in payouts of amounts previously earned."

MEPs will now wait for EU member states to agree on a common position on the new UCITS rules. After that, negotiations will start.

Mr Giegold has called today a 'schwarzer Tag' (a 'black day'), but the truth is the bonus cap would have been a bad idea for a number of reasons:
So, good news from Strasbourg, although similar proposals on remuneration in the financial services sector are likely to come up again sooner or later - especially from the European Parliament.

However, today's vote shows that the UK is indeed listened to in Europe when it comes to financial regulation (although it also helped that a lot of UCITS funds are based in France). It's all about having a clear negotiating strategy and moving early enough in the EU's law-making process.
Open Europe blog team at 1:55 pm